THE URALS IS THE MOTHERLAND OF THE FIRST RUSSIAN GOLD, PLATINUM, DIAMONDS, EMERALDS, AND UNIQUE SEMIPRECIOUS STONES.
THE RICH AND OUTSTANDING HISTORY OF THE URALS IS WIDELY KNOWN. IT IS IN OLD URAL TOWNS WHERE THE FORCE AND MIGHT OF THE RUSSIAN STATE WAS BORN.
THE URALS GAVE OUTSTANDING INVENTORS, SCIENTISTS, ART AND CULTURAL WORKERS TO RUSSIA.
THE CITY OF EKATERINBURG IS THE CAPITAL OF THE URALS (ESTABLISHED IN 1723). 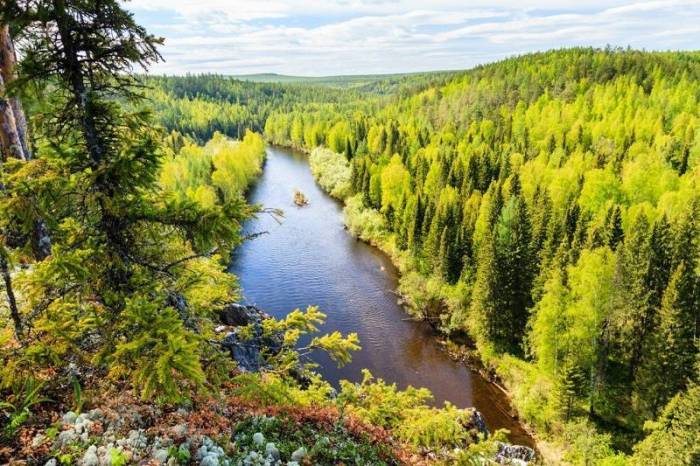 DAY 1
Arrival.
Bus tour “Meeting with Ekaterinburg!”, visiting the Cathedral on the Blood.
Ekaterinburg is the capital of the Urals; the city is located at the border of Europe and Asia, on the eastern slope of the middle part of the Ural Mountains and is one of the major business, scientific, cultural, and travel centers of Russia.
In 2018 Ekaterinburg celebrated its 295 anniversary. The Museum of Fine Arts, among its exhibits there is a cast-iron openwork Kasli pavilion, which was awarded the Grand Prix at the World exhibition in Paris in 1900.
A tour “To the Border of Europe and Asia” (40 km away from Ekaterinburg). Near the obelisk on the border of Europe and Asia tourists will have an exclusive opportunity to stand in Europe with one foot and in Asia with the other, and make a wish, which will definitely come true. The Geological Museum with its unique collection of exhibits of local origin (over 30 thousand pieces).
Lunch, dinner at the city restaurant.
Transfer to hotel. Check-in time.
Rest. Spare time.

DAY 2
07.30 - 08.30 - Breakfast at the hotel.
Departure from Ekaterinburg. A bus tour “To the Town of Nevyansk” (85 km away from Ekaterinburg), the town was established in early 18 century, it used to be a capital of the so-called domain of Akinfy Demidov, son of Nikita Demidov (fellow of Tsar Peter the Great). Demidov's «falling tower» (1725), which still keeps its mysteries and secrets.
Museum of Local History.
13.30 - 14.30 - Lunch in the city cafe.
Transfer to the old village of gold-miners of Byngi (7 km away from Nevyansk).
When it's warm then one can see the dredges work if one looks out of the bus' window. Visiting a unique church with Old Believer icons.
Transfer to the village of Tavolgi (7 km away from the village of Byngi). Visiting the workshop of a hereditary potter (original souvenirs and clay ware), a master-class.
Transfer to the town of Nizhny Tagil (50 km away from Nevyansk, the town was established in 1722).
Check in the “Demidov Plaza” hotel.
Currently Nizhny Tagil is in the top 30 towns in Russia by the population and economical potential. It is one of the most important industrial, cultural, and scientific centers in the Ural region.
The history of the town is closely linked with the history of Russia. Metal from Nizny Tagil was used to make the bayonets of Suvorov and Kutuzov, the great military leaders. It was here where the engine created by the father and the son Tcherepanovs was put on the rails. Nizhny Tagil is the birthplace of a unique trade of making trays.
Dinner at the city restaurant.
Rest. Spare time.

DAY 3
07.30 - 09.30 - Breakfast at the hotel.
A general bus tour around Nizhny Tagil “The Town of Craftsmen”.
The richest Museum of Local History (with rarities of 18-19 centuries).
The unique Museum of trade of making trays Dom Khudoyarovykh.
Victualling yard (Proviantskiye sklady. 18 century).
Eco-industrial technopark "Old Demidovskiy Factory" - the museum-factory of the history of the development of the technology of ferrous metallurgy, which was established in 1989 and is the first and only in Russia.
The first blast furnaces of the Nizhny Tagil iron-smelting and iron-making plant, one of the largest and most advanced enterprises of Russia and Europe of the 18th century, began work on December 25, 1725. The old Demidov plant is the heart of Nizhny Tagil.
Lunch, dinner in the city cafe.

DAY 4
07.30 - 08.30 - Breakfast at the hotel.
Departure from Nizhny Tagil. Transfer to the town of Verkhnyaya Pyshma.
A trip to one of the world's largest museums of military and automotive equipment and history.
The museum "XX century AUTO" presents the entire 130-year history of cars.
You will see amazing cars of the beginning of the twentieth century, stylish cars of 1920s-30s, xx, respectable representative limousines, vintage retro motorcycles, fast-paced race cars and much more.
13.30 - 14.30 - Lunch in the city cafe.
Departure to Ekateinburg (15 km away from Ekaterinburg) – to the railway station or to the airport.

APPROXIMATE DATES OF THE TOUR: AT THE CLIENT'S REQUEST

COST OF TOUR DOES NOT INCLUDE:
• railway travel/air travel
• breakfast on the 1st day
• photo and video shooting in museums
• personal expenses